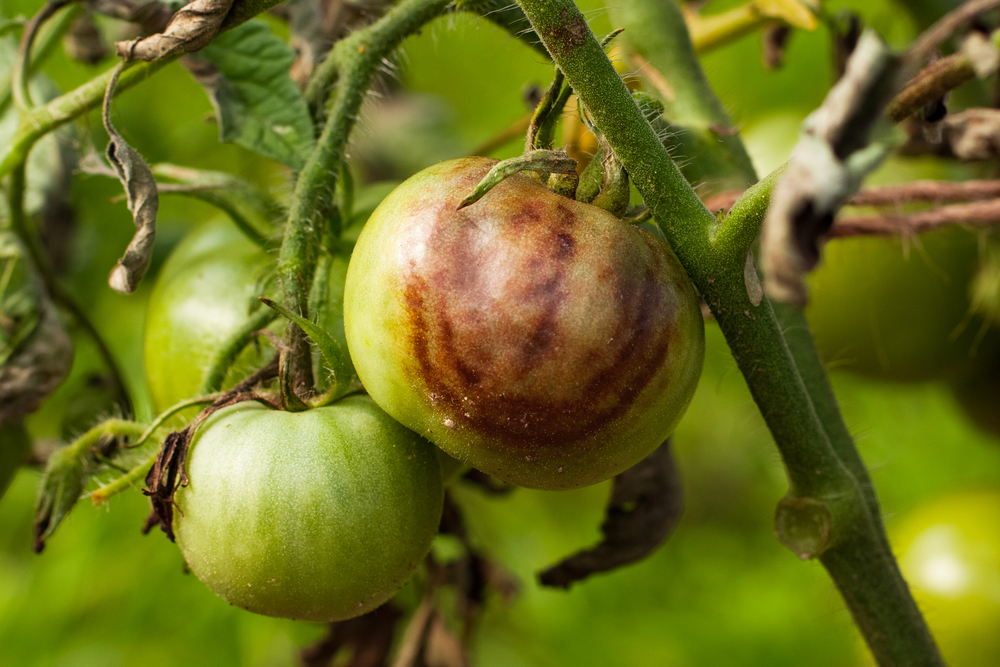 Early blight affects tomatoes, potatoes, eggplants, and other plants of the Solanaceae family. The disease is caused by the fungus Alternaria solani which spreads slowly by air, infected windblown soil, and splashing rain. It thrives in moist, hot environments.

Early blight largely affects older, lower leaves and causes the development of strangely coloured, bullseye-looking spots. If left unattended, the disease will spread to the rest of the plant. Distinct lesions will occur on both the stem and fruit. Eventually, the affected leaves will die, reducing foliage around the fruits, opening the door to a plethora of other issues.

Early blight can also affect seedlings. Dark spots will first appear on the cotyledons and stems of young plants.

Late blight is caused by a completely different pathogen Phytophthora infestans (the one responsible for the Irish potato famine in 1845). Once spores land on your tomatoes, the infection can take hold in an hour, with symptoms appearing in a few days.

Like early blight, lesions appear on lower leaves, stems, and the fruit. It spreads remarkably quickly, destroying the entire plant and spreading to the rest of your garden if not handled immediately.

Early blight loves warm weather, but can also survive through winter on infected plant debris or in the soil. Closely planted crops with no air circulation and overhead watering create prime conditions for early blight to take hold.

Late blight, on the other hand, favours cooler temperatures. Its spores germinate in cooler weather, especially after rain, but lesions tend to develop at slightly warmer temperatures.

Early blight typically begins with a few tan-centred spots per leaf. As the spots enlarge, they become dark brown and begin to look like bullseyes due to their yellowing edges. Leaves begin to drop when the disease spreads to the rest of the plant.

Affected stems will develop collar rot – the formation of dark, sunken bruises above or on the soil line. The disease spreads from the stems to the fruit, causing indented spots to appear beneath the skin.

Late blight lesions begin on the edges of older, lower leaves. They start as pale green-grey spots and turn brown to purple-black in colour. A white, fuzzy mould may appear on the underside of the leaves in humid conditions.

Stem damage appears as brown-black spots that will cause the entire vine to die off. The disease causes brown-grey spots with a leathery texture to form on the fruit. These spots appear near the tops of the fruit and white mould will also appear here if conditions remain humid, as opposed to early blight, where no mould appears.

You may have a chance of treating these diseases and saving your tomatoes if caught in time.  Start by removing and destroying any affected leaves. Apply a vegetable-safe fungicide according to package instructions and continue to monitor the spread of the disease. If the problem remains unresolved, you’ll need to remove the entire plant before the disease spreads to other parts of your garden. To avoid managing problems with disease, your best form of treatment is prevention.