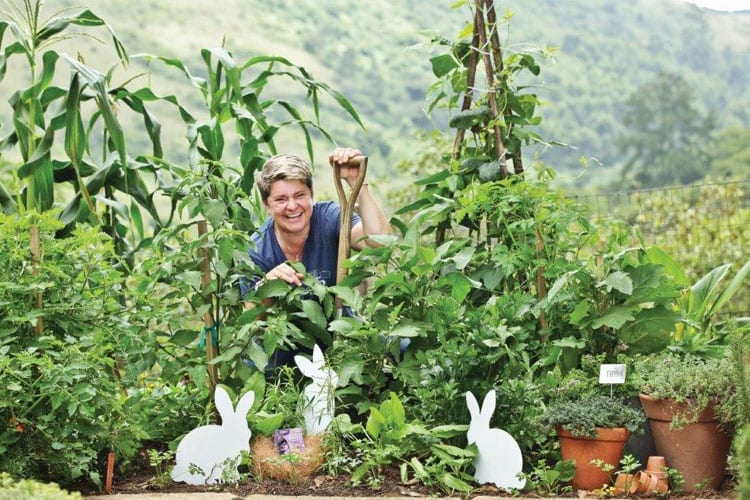 The other day I was watching the trailer of the new Peter Rabbit™ movie and it brought back memories of my own childhood, when we used to sneak into my dad’s veggie garden and liberate his monkey nuts. Just like Peter Rabbit snuck into Mr McGregor’s garden to steal veggies, it was impossible for us to resist the temptation of the tasty morsels in my dad’s veggie garden.

Sometimes my best friend Angus and I would camp out under the stars in the garden, and one of our favourite meals was a bowl of boiled monkey nuts. Instead of roasting them like most people do, our family has always enjoyed the boiled version. To this day we still serve big bowls filled to the brim as a snack at Christmas time.

On our campouts Angus and I would make a fire in an old coffee can, find a piece of grid and a pot to cook our nuts, and then sneak into the veggie garden to dig up plants to gather the nuts. We thought we were very clever, as we would pick odd plants in the rows, take the harvest from the roots and then carefully put the plants back, all to hide the evidence. But just like Mr McGregor did, my dad would get mad when he found these dying plants and scream to my mother, “Jennifer, look what your children have done!” Then we would be disowned for a few days.

We lived in a pretty remote area so there were no friends to go and play with in the afternoons. Instead we as kids were always playing in the garden, and in the evenings there were chores to be done out in the veggie garden. This part of the garden was my dad’s domain and the only area that was fenced off from the chickens and bantams we had running around.

One of our chores was to clean out the chicken litter from the asbestos runs (yes, asbestos in those days) to fertilise the veggie garden. Some of this was used as a mulch around the veggies, and some was soaked in huge drums with other ingredients to make liquid fertiliser we used to gather in watering cans.

Dad grew the most amazing tomatoes, which was his prime crop. Two plants were planted in a big fertiliser bag filled with his ‘mixture’, and each bag was placed on a structure of cement blocks onto which long poles were placed so that the bags sat across the poles, off the ground, and we would poke holes in the bottom of the bags for drainage. The plants were nurtured with watering cans of goodness-filled water, one full five-litre can for each plant every day, because tomatoes are thirsty plants. We weren’t allowed to skimp on this job or turn to the hosepipe.

Once they grew up a bit, they needed to be staked, and we couldn’t pop over to the hardware store and grab some bamboo droppers, so as a family we went out on a weekend and cut bamboo for the tomatoes (and some for my fishing rods!) A long, intricate trellis system was constructed around the tomatoes, and as they got bigger we would tie them to the trellis with my mother’s old stockings. In those days she worked in the bank and had to wear stockings and high-heel pumps to work, so there was always a supply of worn-out stockings. Nowadays we buy ties.

As the tomatoes started flowering Dad would pinch out the early flowers so that the plants grew bushy. Once the crop started, we picked kilograms of beautiful tomatoes that he would take to work and sell. His favourite tomato was the ‘Moneymaker’, which is one of the oldest varieties and is still available today. Gosh, if we picked a big one it would have pride of place on the dining room table, and my dad would tell my mother on countless occasions how amazing that tomato was.

My dad was one of the first people in our area to grow the William’s banana, which he got from a commercial grower on the South Coast. These trees were like giants in the garden (although I was quite short then). When the flowers at the bottom of the banana bunches started falling off, the still-green bananas would be cut off with a hacksaw blade and taken back to the veranda where a table was set up with layers of newspaper. We would cut off the hands and lay them down, covering them with another layer of newspaper to trap ethylene to ripen them. The whole process was controlled so that the bananas would ripen in succession.

In those days family and friends often used to visit us, and we them on the weekends. Whenever somebody visited they always left with something, be it a bag of the latest crop or some seedlings we dug up and wrapped in newspaper with a little water added. No one ever left without something from the veggie garden. Today I still garden in the same manner, and everyone always leaves with something from the garden.

The only difference is that we sow seed in trays to keep a more controlled environment, and I use the hardware store a lot more. I have the same ritual that my dad had: every day when I come home from work I go into the garden to see what needs to be done. I pick ingredients to cook with, and just spend time enjoying the garden. And as Peter Rabbit hides in the potting shed in the story, so I like to hide in my potting shed. I think I love my potting shed more than my house! It’s filled with family memories, like the concrete pots dad made for mom’s orchids, still looking strong after all this time, and quirky things I have kept from our old garden to use in my new garden today.

One of my fondest memories is the annual Easter egg hunt in the garden. Being very competitive, I had to find the most Cadbury Dairy Milk eggs. We would then torment aunty Yvonne by pushing as many eggs as we could into the exhaust pipe of her old VW Beetle, and watch as she tried to start the car, which would splutter like crazy until the eggs shot out of the exhaust. I have to say that chocolate and growing veggies is in my blood, and without them life just wouldn’t be the same!