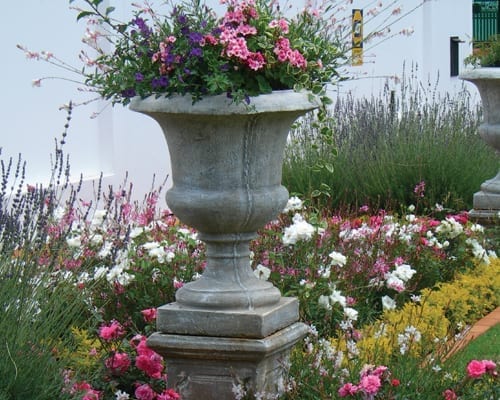 Climbing Roses – A Special Case
Climbing roses require attention in August. To open up space for new growth, older branches can be removed and the remaining stems, from the previous season, tied to a support, as horizontally as possible. Tying stems horizontally activates all the eyes along the stem, which then produce shoots and flower. The result is many more flowers than if the stems are left to grow upright, which results in flowers only at the end of a stem.

Get the look
This garden is as pretty as a picture, the gardener having cleverly used roses to complement a mixed planting. Glowing ‘Salmon Sunsation’ and ‘White Sunsation’ roses are planted en masse among pink and white gaura with bold clumps of Margaret Roberts lavender and edged with a clipped hedge of golden Duranta ‘Sheena’s gold’. The urn, filled with pelargoniums, gaura and solanum in the same colour scheme, acts as the central focus. Other bedding roses that could be used to equal effect are ‘Tawny Profusion’, ‘Deloitte and Touche’, ‘Ice Sunsation’, ‘Granny’s Delight’, ‘Dawn Sunsation’ and ’Pink Profusion’.