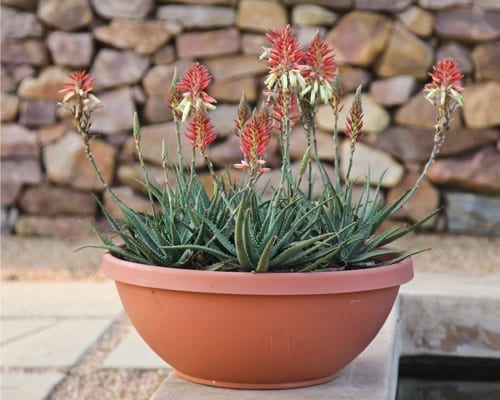 During the course of the last two or three decades, aloes have become popular garden plants for a number of different reasons. Many of them are indigenous to South Africa and are able to cope with dry growing conditions and the water shortages that have become a regular challenge. Most of them bloom in winter when flowers are scarce in the garden, and the vibrant inflorescences are rich in nectar, creating a winter feast for birds and insects when food is scarce. There are many other good reasons for growing aloes in modern gardens in a wide and diverse range of climatic conditions.

Today, smaller aloe species and numerous hybrids are sought after for growing in the limited space afforded by apartment and town house living. Aloes generally need full sun, well-drained soil and occasional watering, along with feeding in the spring and summer growing season to keep them in good health. Some can withstand winter cold while others are damaged by frost, so make sure that you plant cold hardy aloes in areas with extreme winter climates.

Here are some of the most popular small or low-growing aloes to consider for use in the modern day garden. Use them in pots and containers where space is limited. They last for a good many flowering seasons in these contained growing conditions. Please use well-drained potting soil with grit, sand or gravel added to the mixture for extra weight and porosity.

Species refers to a basic category in plant classification below genus (in this case aloe) that consists of similar characteristics that all breed true in the wild. In other words, plants referred to as aloe species are found growing in their pure form in nature. Today garden plants tend to be mostly hybrids bred for superior performance. However, many purists still enjoy cultivating plants in the form that Mother Nature provided. Check these out:

2. Aloe suprafoliata (book aloe) has two-ranked leaves arranged in rows or opposite pairs when the plant is still young. Later they form a spiral of foliage from a single basal stem. Slender spikes of pinkish red flowers appear from May to July. 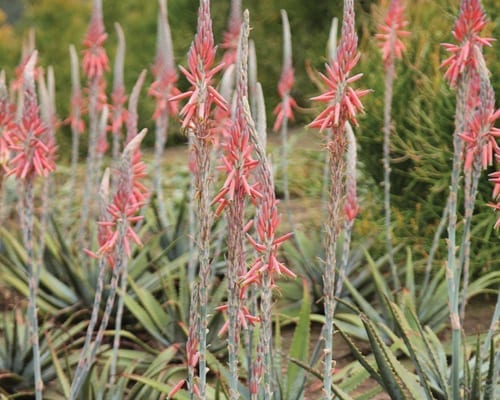 4. Aloe chabaudii (Chabaud’s aloe) grows in neat rosettes of grey foliage. Small red to pinkish flowers are borne in large multi-branched inflorescences during June and July. This is a great garden aloe. 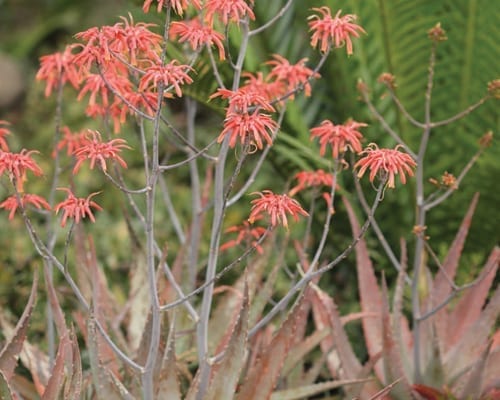 5. Aloe peglerae (red-hot poker) has a distinctive growth habit with inward curving leaves forming a rounded ball. Densely packed flowers on short stubby racemes appear above the foliage in July and August, and the orange-red buds open a greenish yellow. 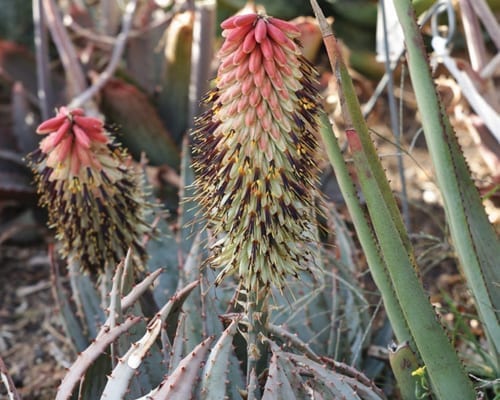 Hybrids are created either naturally or by the hand of man by crossing either two different species or a species with an hybrid or two different hybrids to create a new hybrid. Hybrids are seldom found growing naturally in the wild and are usually developed through elaborate breeding programmes that are carefully controlled and monitored. Look out for these compact aloe hybrids on the local market:

1. Aloe ‘Bushwhacker’ produces masses of pink to cream flowers in upright spikes from May to June. It is a real beauty, especially planted in large groupings.

2. Aloe ‘Lemon Drops’ forms small clumps of speckled leaves and produces small yellow flowers for most of the year if well watered. 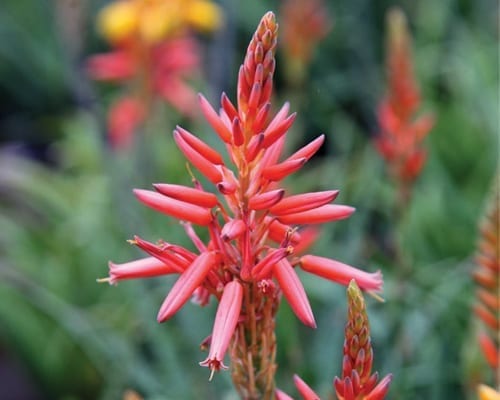 5. Aloe ‘Porcupine’ has green foliage and an abundance of bicolored flowers with orange buds opening to a pale cream shade from March to August.

6. Aloe ‘Saffron’ forms low clumps and multiplies rapidly, with pale lime-yellow flowers in April and May.

7. Aloe ‘Sea Urchin’ is similar to the well-known A. ‘Hedgehog’, with a neat habit and an abundance of orangey-red flowers later in the season. 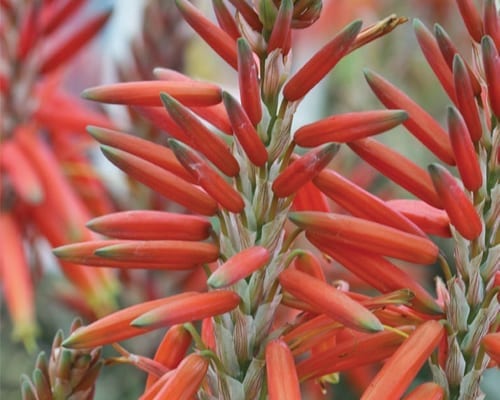 Exciting times lie ahead in terms of new aloe hybrids appearing on the market. Aloes that bloom more than once a year will be the norm rather than the exception, and aloes with attractive leaves and spines will add to their overall good looks and permanent appeal. New hybrids with greater disease resistance and more drought tolerance will also grace our gardens. Even with all these exciting new improvements, aloes will always purvey the special aura of the African bushveld in our gardens. Perhaps these new hybrids will do this with a little more intensity?

A new book, Tree Aloes of Africa by Ernst van Jaarsveld and Eric Judd, was published in 2015. This was brought about by the reshuffling of the aloe group of plants through new classification systems using plant DNA as the main tool. This has led to the change of name for tree aloes to Aloidendron, and Kumara in the case of Aloe plicatilis. The book has extensive coverage of the subject matter from historical information to natural distribution and garden cultivation. It’s a must-have publication for botanists, horticulturists, naturalists and gardeners alike. Keeping abreast of changes in the botanical world is part and parcel of modern-day advancement in the realms of science.

Ernst and Eric are experts in their respective fields of botany and botanical art and have combined magnificently in compiling this special book for the benefit of all plant enthusiasts.