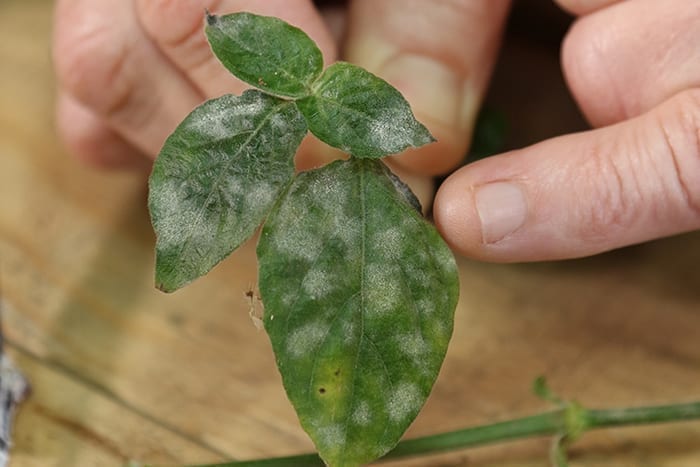 This particular bacterium, or disease, is one of the good guys, keeping fungal outbreaks under control.

It’s easy to see things happening in the spring garden: shoots peak out of the soil, leaves unfoil, buds burst open and everything grows seemingly overnight. But there is as much, perhaps even more, happening that we can’t see with the naked eye.

Behind that patina of spring colour and new life is a fierce battle raging throughout the garden, above the soil and below its surface, on leaves and amongst roots. Microbes are locked in territorial warfare, competing for space and resources to ensure their own survival and their expansion.

We tend to think of bacteria and fungi in the garden as the bad guys, to be eliminated in the pursuit of a pristine and ‘clean’ landscape, but some of these microbes need to be there, are beneficial and play a vital part in the garden’s ecosystem.

One of these bacterial ‘good guys’ is Bacillus amyloliquefaciens (Ba), discovered in 1943 and intensely researched since then for its properties as a plant growth stimulant and broad-spectrum biofungicide. Ba is a beneficial bacterium that occurs naturally in soils, and is now globally recognised as an effective, nontoxic biofungicide that is widely used in agriculture and suitable for use in organic production. Ba is now available on retailers’ shelves as EcoBuz Disease Pro, offering home gardeners a biological disease-management alternative.

Disease Pro offers a natural disease-management solution that has no impact on the environment or beneficial insects, pets or children playing in it. It is also residue-free and has no withholding period, which means that edibles can be harvested after being treated and immediately eaten. You can literally apply Disease Pro, pick a fruit and eat it, totally safely.

Disease Pro is an excellent resistance management product, helping to prevent pathogens from becoming resistant to a particular treatment. Due to its unique mode of action it may be used in a program to avoid routine spraying of the same chemical actives, which can result in resistant disease populations that become very difficult to manage. It can also be used in conjunction with and at the same time as chemical fungicides (excluding copper based products).

The ‘active ingredient’ in Disease Pro consists of Ba (strain D747) bacterial spores, which are mixed with water and then applied to plant surfaces, where they germinate and grow. Disease Pro supresses powdery mildew and downy mildew, and is registered as such on a number of crops such as table grapes and cucurbits (the pumpkin and squash family).

Disease Pro works best as a preventative spray, applied before the onset of a fungal infection. If you know that you live in a damp area or that your garden is prone to mildew infections, inoculate susceptible plants before mildew becomes a problem. The Ba spores will quickly colonise the plant surfaces, occupying space and resources that the mildew or other pathogens would need to become established. Apply weekly with a minimum of three applications. So get out there and get multiplying those spores!